Most of us will come face-to-face will banner ads every day of the week, although a lot of the time, we probably won’t even realise it. The sad thing about the modern world is that a good percentage of us have become so accustomed to seeing banners just about everywhere we go that in a vast number of cases, we’ll be somewhat blind to them.

Obviously, one of the factors that causes this blindness is simply the fact that most banner designs are pretty dull and boring. It doesn’t matter whether you see a banner ad in the real world while you’re driving or whether you see a banner ad on a website, if it isn’t interesting, it’s unlikely that anyone (including you) will take notice of it.

If you’re considering advertising your business using a banner ad, you’re going to need to make something creative if you’re to have any hope of it driving the desired response. Luckily, there are some extremely creative banner ads out there that simply ooze creativity. I’ve rounded up a list of a few of my favourites so that hopefully, you’ll feel a bit more inspired when it comes to creating your banner. 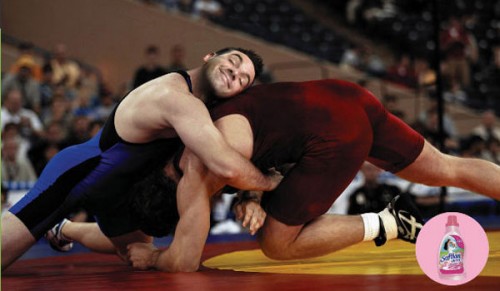 I’ve come across this ad a number of times and it never fails to make me laugh. Softlan Ultra is a brand of fabric conditioner and as you can clearly see from this ad, it claims to make your clothes irresistibly soft.

This creative ad uses two wrestlers to depict just how soft and irresistible it’s likely to make your clothes. You can see that both of the wrestlers are in the middle of a wrestling match but despite this, one of the wrestlers looks to have found so much comfort that he’s accidentally fallen asleep on the other wrestlers clothing.

Obviously, the wrestler must have washed his clothes with the Softlan Ultra fabric conditioner.

It’s a pretty simple and minimalistic advert and it runs absolutely no ad copy. It just has the Softlan Ultra product depicted in the bottom right corner. Despite this, the message in the advert is clear and also, pretty funny. 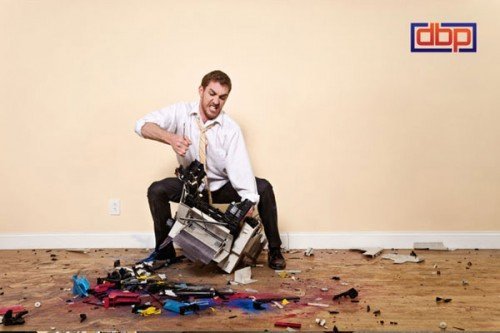 If you were thinking that it’s only the big brands that create these incredible creative ads then think again. Here we have a banner ad created by a small UK-based printing company and once again, it not only oozes creativity but is also pretty humorous.

Chances are that if you’ve ever used a home printer, you’ll have had trouble with it. I know that I regularly have trouble with my home printer and sometimes, I feel like ripping it to shreds.

Discount Banner Printing have used this common problem to create their banner ad which depicts a guy literally ripping his printer to shreds. No doubt he couldn’t understand why it wouldn’t print that important document he desperately needed printing.

Not only is this a funny, attention grabbing image but it promotes a clear message. The ad ran the copy “Leave it to the pros” which is basically saying “Why bother battling with your printer? Leave it to us”. 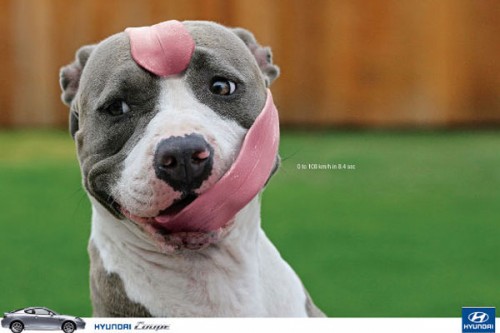 I absolutely love this exceptionally creative ad from one of the leading car manufacturers in the world; Hyundai.

This ad was created to advertise their latest Hyundai Coupe vehicle which claims to go from 0 – 100 kmph in just 8.4 seconds. For a lot of advertisers, this might present a bit of a problem; I mean, how do you depict a USP that is based on speed in an interesting way?

Sure, you could have an image of the car speeding around a corner but really, this has been done a million times. Hyundai got a bit more creative than this with their ad and instead, decided to use a cute looking dog to depict this kind of speed.

As most of us will know, dogs tend to stick their head out the window when in a moving vehicle. Now, I wonder what happens when a dog sticks it’s head of the window of a car that goes from 0 – 100 kmph in 8.4 seconds; this perhaps? 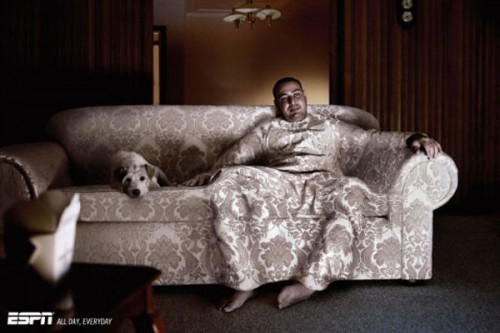 ESPN is one of the most widely viewed sports-related TV channels in the world and one of the unique things about the channel is that is broadcasts high quality sporting action all day, every day.

ESPN used this unique selling point in which to base their banner ad and as you can see, a man appears to be blending in with the sofa as he watches ESPN. Obviously, he’s been taking advantage of the 24-hour sporting action and appears not to have moved for a pretty substantial period of time. In fact, he’s been that there for so long that he seems to have become part of the sofa.

It’s a bit of a silly ad to tell the truth but there’s no doubt that it’s not only hugely creative but also, pretty funny. Still, as great as ESPN is, I wouldn’t recommend that anyone takes full advantage of their 24-hour action; well, not unless you like the idea of becoming embedded in your sofa.

We live in a world where there is a shortage of creative advertising. Occasionally, we come across an ad (such as the ones listed in this post) that really stands out from the sea of ads out there but most of the time, we’re bombarded by dull, boring and extremely uncreative advertising.

This is something that needs to change. If you’re looking to create a banner ad for your company, you should remember that you don’t need to hire a leading advertising agency to come up with something creative and unique, you just need to spend a bit of time thinking of a concept that stands out from the crowd.

Chris is a marketer and designer for the printing company; www.discountbannerprinting.co.uk based in the UK. He has a passion for design and loves creative ads that make him laugh.
View all posts by Chris →